India is a rich land in terms of culture, heritage and festivals. With people of different religions, races and communities living together in unison, the country celebrates some of the major festivals with great devotion, joy and enthusiasm.

We have mentioned some of the major festivals of India and the significance with which they are celebrated.

Diwali, also called ‘festivals of lights’ or Deepawali is one of the biggest Indian festivals. The five day festival dignifies the victory of brightness over darkness by celebrating the return of Lord Rama and Goddess Sita to Ayodhya after 14 years of exile. According to Hindu mythology, Lord Ram defeated the Demon King Ravana by rescuing Goddess Sita with help of Lord Hanuman, the monkey God and Lord Ram’s most faithful devotee.

Diwali is celebrated throughout the country with sheer devotion and excitement. This year, it is to be celebrated on 7th November in all regions of India. 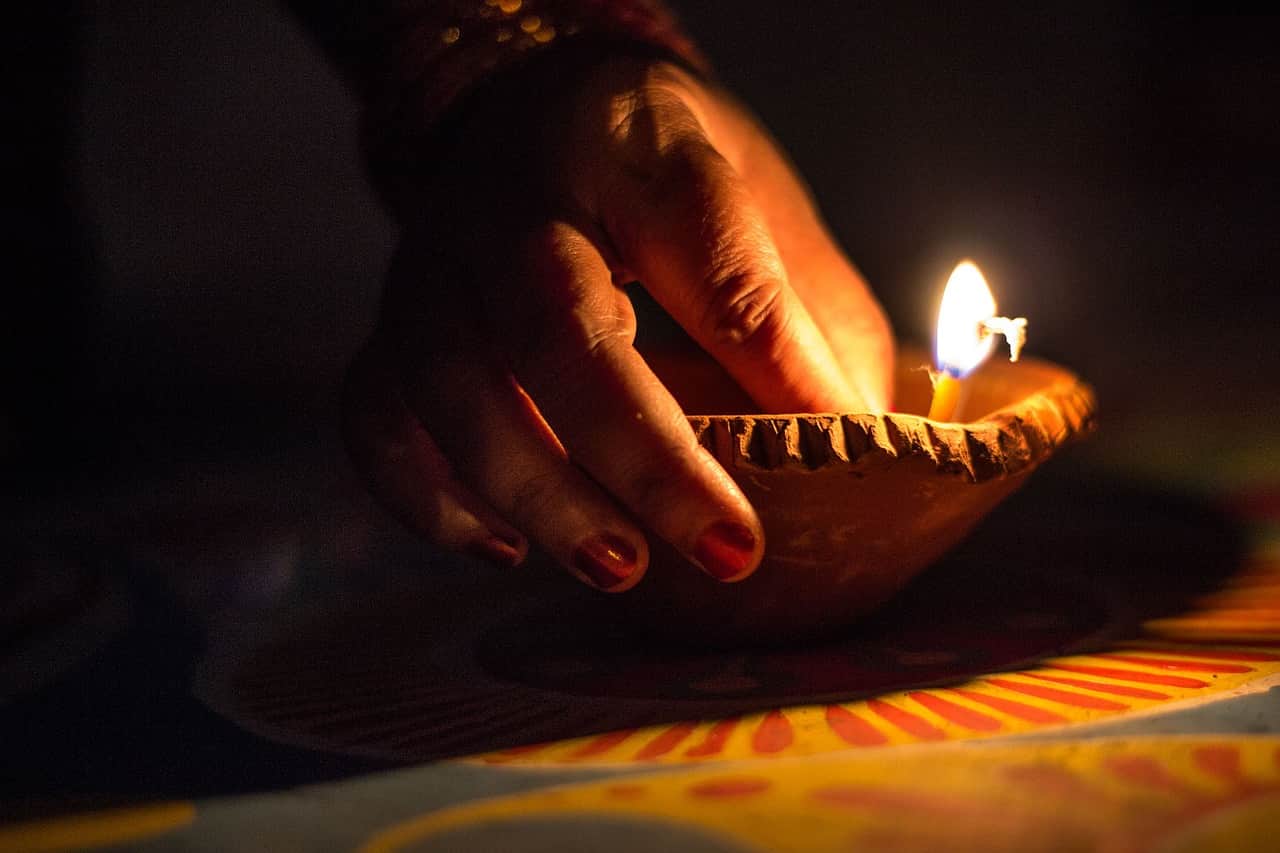 How is Diwali celebrated?

Each day of the five day festival has different significance. The first day is called “Dhanteras” which holds a belief of buying Gold and new utensils for the kitchen. It is a celebration of wealth. Houses are kept spotless clean to welcome the Goddess of prosperity, Goddess Lakshmi. The second day is “Choti Diwali” also called “Naraka Chaturdasi” in south India. On this day, Rangoli is designed on the courtyards and doorways of homes. It is believed that on this day, Goddess Kali and Lord Krishna killed the demon Narakasura freeing almost 16,000 princesses held captive.

The third and main day is when people worship Goddess Lakshmi and Lord Ganeshs seeking wealth and prosperity. Fireworks and crackers are burnt all across the country celebrating the return of Lord Ram to Ayodhya. Exchange of gifts and sweets among family and friends is a tradition followed since years now. The day is also celebrated as Kali Puja in several Indian states like Odisha, West Bengal and Assam.

The fourth day starts with Govardhan Puja in North India to commemorate the victory of Lord Krishna over Lord Indra, God of Rains. IN the areas of Tamil Nadu, Karnataka and Maharashra, the day is celebrated as Bali Padyami or Bali Pratipada in memory of the Lord Vishnu’s victory over demon king Bali. The last day or fifth day is called Bhai Duj as the bond between brothers and sisters is celebrated by sharing food and gifts.

Ganesh Chaturhi is one of the most religious festivals of India celebrated throughout the country but best in Maharashtra and Hyderabad. It is a celebration of Lord Ganesha’s birthday that continues for 10 consecutive days. 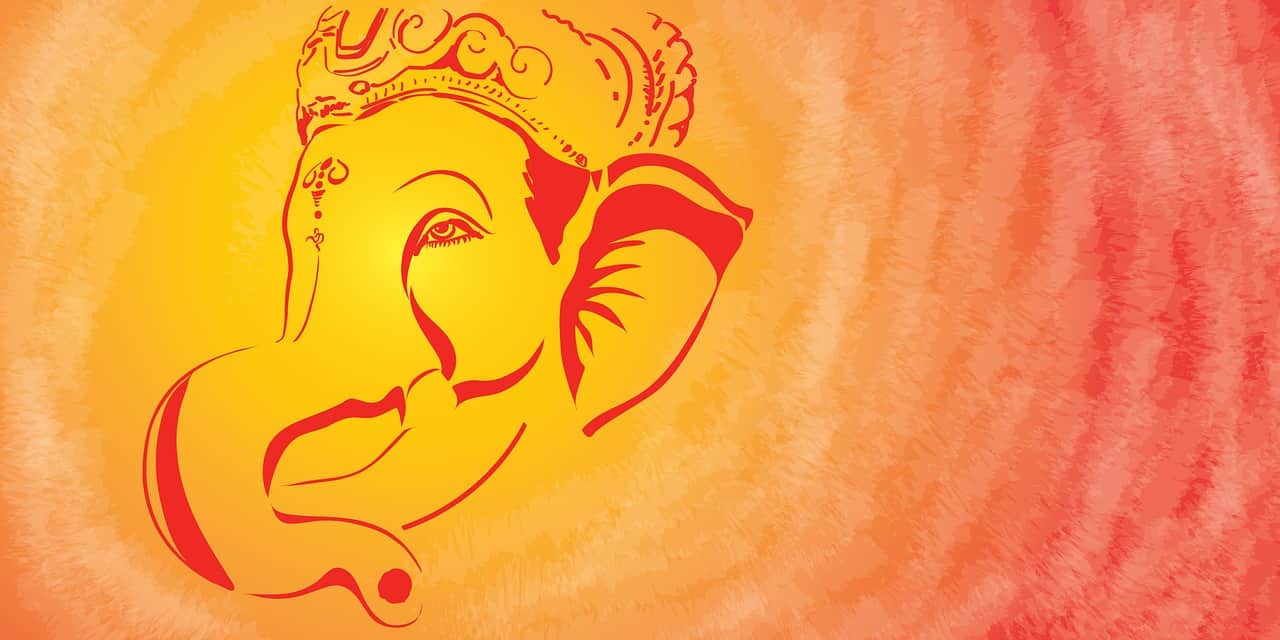 How is Ganesh Chaturthi celebrated?

Beautifully handcrafted idols of Lord Ganehsa are installed in homes and public pandals. A ritual called “Prana Pratishta” is performed on an auspicious time sometime around midday known as Madhyahna (time believed to be during Lord Ganehsa birth) to call in power of the God into the mud idol. Prana Pratishtha is followed by a 16 step ritual called Shodashopachara Puja. Numerous kinds of offerings are made to idol like sweets, flowers, coconuts, etc. Special sweet ‘Modak’ that is believed to be Ganesha’s favorite is prepared in homes as ‘prasad’.

Another traditional belief reveals that anyone who sees the moon during specific time on Ganesh Chaturthi will be cursed with theft accusations and society shall dishonor them until they chant a specific mantra. However, not everyone follows the belief in today’s modern society. Why such belief? It was followed after false accusations were made against Lord Krishna of stealing a priced jewel. The Sage Narada came up with a conclusion that Lord Krishna might have seen the moon on the Bhadrapada Shukla Chaturdthi and faced the curse. It is the same day when Ganesh Chaturthi is celebrated. As such, a person who saw the moon during this time would get a curse similar to the Lord. The idols are worshipped and evening aarti is performed every day until Anant Chaturdashi, when the idols in homes and public pandals are immersed in water.

Muharram has to be on the list of festivals of India for its great significance in the history of Islam. It is the first month in Islamic Calendar. It is a 10 days Muslim festival celebrated all across India. The two sects of Muslims, Shia and Sunni, observe the 10th day of the month (The day of Ashoura) in different manner. 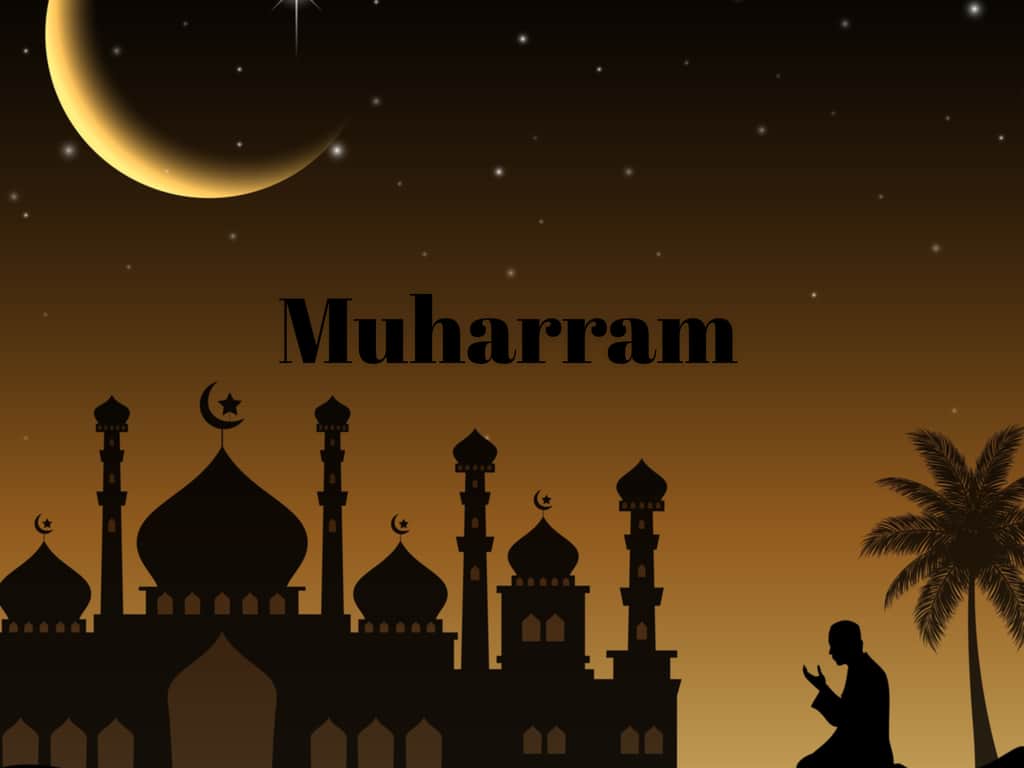 How is Muharram observed?

For Shia, Muharram is a month of mourning as they remember the massacre of Karbala in Battle of Karbala and the death of Imam Hussein, grandson of Prophet Mohammad on this day in 680 CE. On Ashoura, Shia get on mourning rallies and marches hitting themselves to feel the pain Hussein experienced before his death.

They mourn through public expressions commemorating the Battle of Karbala. Shias hit themselves with chains and blunt swords as they remember Imam al-Hussein’s sacrifice in humanity’s struggle against tyranny, oppression and injustice.

On the contrary of Shias’ way of observation, Sunni Muslims commemorate the 10th day of Muharram (Ashoura) through fasting as it is believed that Prophet Mohammad kept fast in Mecca on this day. For them, Ashoura is a day of showing gratitude and respect towards the Prophet. However they do not participate in the mourning rituals.

These days, some Shia clerics discourage the mourning rituals of bloodletting, considering it to present a negative image of their community. Rather, blood donation to patients in need is encouraged in the community.

Onam is a harvest festival and one of the most significant festivals of Kerala, a southern state of India. People of different communities all across the state celebrate the festival with abundant joy and devotion. The festival is celebrated in Chingam month of the Kollavarsham (Malayalam Calendar).

Another significance of the festival is welcoming King Mahabali as his spirit is assumed to visit the state during Onam. The people of Kerala during the demon King’s reign lived in great prosperity and wisdom. The king was regarded high in the eyes of his people but his egoistic nature made Gods destroy him. However, for his good deeds and love for his people, God grated him a boon to visit Kerala once in a year and this is how Onam celebrations start. 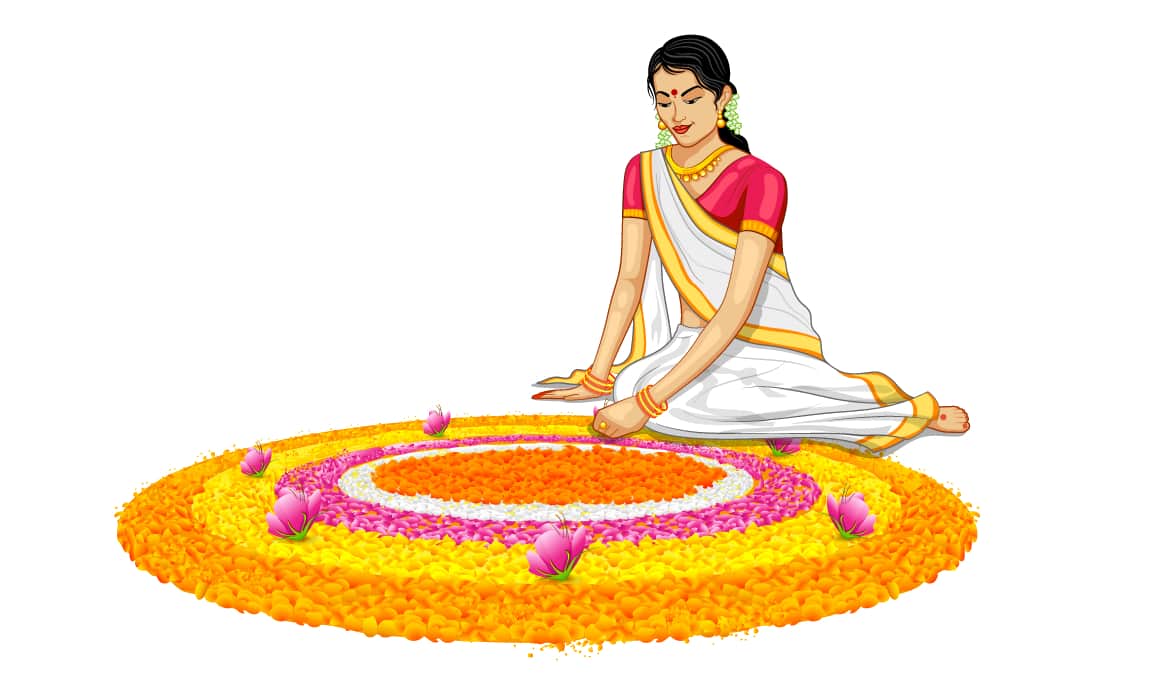 How is Onam celebrated?

Onam unveils the rich culture of Kerala throughout the days of celebrations. Elaborate arrangements are made by different communities. The entire region of the state remains engrossed in the spirit of carnivals and celebrations for four to ten days. The first day of the festival is called Atham and the tenth and last day as Thiruonam. There are feasts, elegant dance performances, folk songs and enthusiastic games. Everything from boats, flowers and elephants are a part of the dynamic event of Onam. The Government of India promotes the festival internationally and it is declared “Tourist Week” in Kerala during the celebrations of Onam.

A grand feast Onasadya is prepared on the last day “Thiruonam” that is considered most impressive of all the rituals and celebrations performed. The feast involves a nine course meal with 11-13 delicious dishes of the state. Onasadya is served to the people on banana leaves as they get seated on a mat on the floor to have the delicacies.

Yet another remarkable part of Onam celebration is Vallamkali or the Snake Boat Race on River Pampa. It is a phenomenal sight of colorful snake boats and hundreds of skilled boatmen oaring them through the cheerful chants of spectators. A tradition of playing games (Onakalikal) during Onam is followed since years. Men participae in sports like Ambeyyal (Archery), Attakalam and Kayyankali (Combats), Kutukutu, Talappanthukali (played using a ball). The women of Kerala get involved in cultural activities. They design Pookalam (flower mats) in the house courtyard in order to welcome King Mahabali. They also perform Thumbi Thullal and Kaikotti Kali, two graceful dance forms along with folk performances like Pulikali and Kummati Kali.

Bihu is another important harvest festival of India celebrated in Assam. Derived from the Sanskrit term, “bishu” meaning “to seek prosperity from God during the season of harvest”, it is celebrated three times in a year. The three sets are represented by different names Magh or Bhogali Bihu in January, Kati or Kongali Bihu in the month of October and Bohag or Rongali Bihu in April. Bohag Bihu is also celebrated as Assamese New Year and Kati Bihu is a reflection of the season of short supplies. 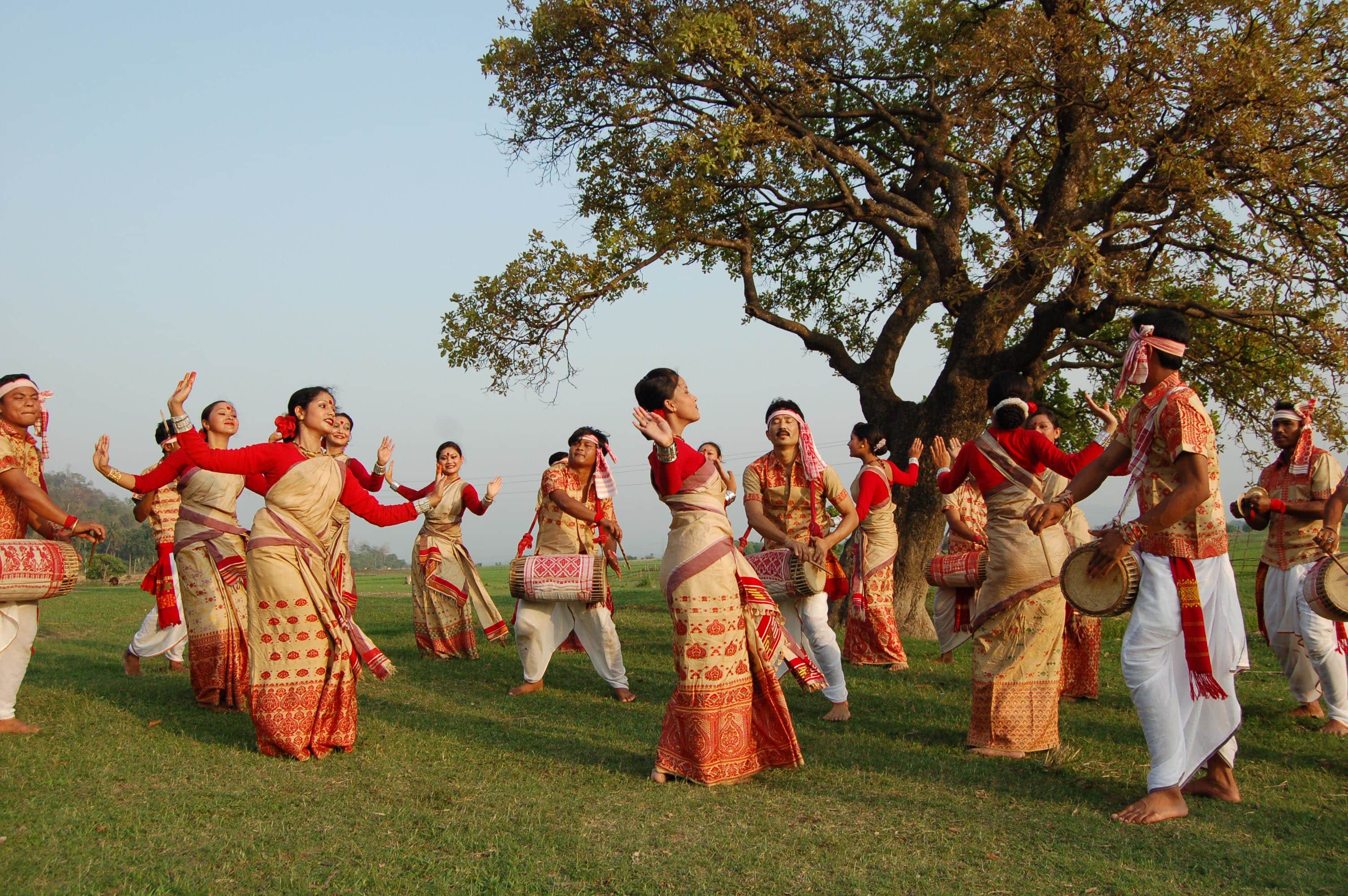 How is Bihu celebrated?

Bihu is celebrated at the same time as Poila Baisakh in West Bengal, Baisakhi in Punjab, Vishu in Kerela and Puthandu in Chennai. Traditional food like pitha (rice cake), larus (prepared of coconut, rice or black sesame seeds) and special dishes like xaak and khar are prepared. People perform the traditional Bihu dance that is a highlight of the festival. It is not just a festival of harvest but a celebration of fertility as well.

Raati Bihu: The celebrations start as the first night of Chaitra month commences. There is a gathering of women in an open field with lit torches. The men of the community play instruments designed from buffalo hornpipe during the event.

Goru Bihu: On the day of Goru Bihu, all the cattle are brought to a common water source. The cattle is cleaned and washed using black gram paste and turmeric. Post bath, the cattle is offered food and prayers are offered with a gesture to thank them for the help in good harvest. A special item is offered them in the evening called ‘Bor Pitha’ (prepared of rice and jaggery) after offering them a garland of tangolti leaves.

Manuah Bihu: On the day of Manuah Bihu, villagers clean their home and take a turmeric bath (considered as a tradition). The day starts with wearing new traditional clothes, seeking the blessings of elders and exchanging gifts. A ritual of writing Sanskrit mantra on Nahar leaves and hiding it is performed in some families. It symbolizes seeking Lord Shiva’s blessing and protection from the elements of nature.

Gosai Bihu: Gosai Bihu is the occasion of worshipping the Gods. Men and Women sing traditional songs in praise in hope of their blessings and protection for good harvest.

Kutum Bihu: This day is for meetings and greetings. People visit their relatives and friends over meal and share new stories.

Senehi Bihu: On this day, lovers meet; spend time with each other and exchange gifts, commonly “Bihuwan”.

Mela Bihu: It is the last day of Bihu celebrations when fairs are arranged in different regions of the state.

These were the famous festivals of India that add to the country’s rich culture and tradition.

The beautiful rainy season has hit Jaipur and we can’t stop thinking about relishing the mouth- watering delicacies. Monsoon brings...

One thing I miss the most while I'm away from home travelling for work is the delicious homemade food. The flavours which are there in...

Top Reasons why Solo Traveling is the Best

“You go away for a long time and return a different person- you never come all the way back”, great words by Paul Theroux. Someone has...

Most Exotic Places in Morocco for Travelers

Morocco is a country full of splendid places, simply breathtaking panoramas. Moustache offers you a well-illustrated list of places to...

Biryani is a classic dish made in many countries across the world. From middle-east to India, this is one wholesome dish full of...